Hail Damage On Your Roof Sucks 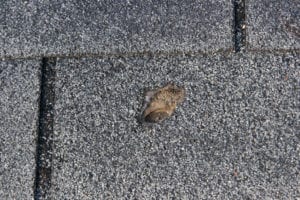 Hailstorms have great potential to cause severe damage on a roof, buy paradoxically, many people actually do not know whether their roofs have been damage or not. That`s because they do not check their roofs on a regular basis, or because the damage looks so benign that is ignored easily.

Unfortunately, it doesn’t matter how good or bad the roof looks after a hailstorm. Hail damage sucks, because it is often a silent enemy.  The roof may look only a bit bruised here and there, so you think you are safe, but in fact you are anything but. Each little hail damage on your roof surface represents a vulnerability that may contribute greatly, in the future, to your roof’s premature failure.

This is why specialists insist on the importance of inspecting your roof after a hailstorm – or any other severe weather event for that matter. One of the most severe consequences of ignoring hail damage on you roof is related to making insurance claims.

Homeowner’s insurance policies cover the roof damage caused by natural disaster, but only if the roof is not too old or neglected by the owner.

Lack of periodic maintenance performed by Lakewood roofers is considered neglect by most insurance companies.

To all our valued clients
Colorado Superior Roofing & Exteriors will remain OPEN & continue to operate during our winter business hours. Monday – Friday 8am – 5:30pm & Saturday 8am – 1pm.

Please understand we are taking all the necessary precautions when meeting with clients.   This includes wearing masks and maintaining proper social distancing.   Our onsite inspections can be done completely outside of your home and our presentations and contract signing can be done online.   We are also helping out clients with special no-interest financing during these uncertain times.